Fragrant and savory Vietnamese soups
Asian cuisine is becoming more and more popular in Ukraine. We enjoy sushi, discover the aromas of Thai dishes, and we are also interested in Vietnamese cuisine. One of the most popular dishes from this country is the Vietnamese pho bo and pho ga soup. This dish is an analogue of our Ukrainian broth. Pho soup is nothing more than beef broth with rice noodles and side dishes (vegetables, tofu). But still, it is so interesting that it is worth talking about the dish in more detail. 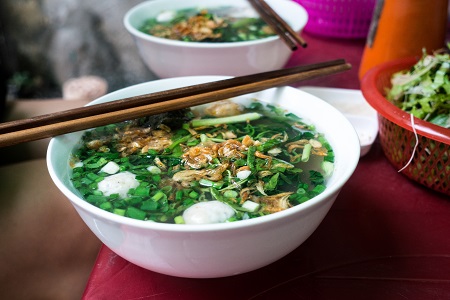 Pho soup is a real visiting card of Vietnamese cuisine. You can cook it with beef or chicken, but noodles, fish sauce and fresh coriander are a must. Pho soup in Vietnam is eaten both for lunch and for breakfast or dinner. It tastes great no matter the time of day.

What is pho soup?
Pho soup can be compared to chicken soup. This is a broth with noodles, fresh coriander and fish sauce. The name of the soup comes from the noodles on which it is based. Long ribbons of thin rice dough noodles are added to pho soup. The noodles are almost white, and the broth is lean and transparent.

How is pho soup made?
Pho soup originated in the northern part of Vietnam (most likely in Nam Dinh province) in the 20th century. However, it did not spread throughout the country until 1954.

The soup is prepared in two ways:

The soup is so famous and popular that it is constantly undergoing various modifications. In the richest versions, it is made with 20 different ingredients. However, it is never made from pork. Previously, pho meat was cooked for hours. Later, the custom of brewing ingredients was introduced.

Besides meat and noodles, the soup contains a large amount of coriander, and all of this is seasoned with fish sauce, which gives the soup its characteristic flavor. Add onion, pepper, ginger, lemon and lime juice to pho. Vietnamese chefs enrich the flavor with star anise and black cardamom.

What should you pay attention to and what to combine pho soup with?
Pho soup goes well with meatballs and even eggs, and is also served in these forms in Vietnamese restaurants. If you decide to order Vietnamese pho ga soup from our food delivery service, then the dish will be decorated with pieces of meat, as in the recipe. This is important for two reasons: firstly, meat is usually not cooked in soup, but only steamed, and secondly, you can arrange the slices aesthetically, which makes the dish even more presentable.

How pho soup is served
Pho soup is served in a small deep bowl and must be eaten with chopsticks. Vietnamese choose the ingredients of the dish with chopsticks while they drink the broth or ... just leave it. When presenting pho, aesthetics are very important. Use the ingredients to create a distinctive mound in the center of the bowl and sprinkle with fresh coriander.

In separate bowls, you can serve additives such as cutlets and fish sauce, if necessary, add salt to the soup to taste.

Similar dishes
A dish similar to pho soup is called bún bò hu. They differ in that the ingredients in pho are just being prepared, and in bún bò huế they are fried before cooking.